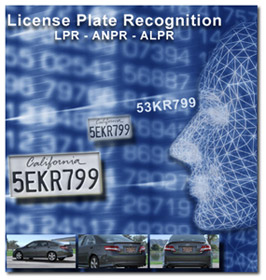 Moderate improvements were made and working models were implemented a few years later in Wokingham, England. This subsequently led to the successful development of commercial contracts and applications for early adopter usage. While still crude, with an accuracy that averaged below 60%, the technology was state of the art during its time.

Several decades later, the technology has greatly evolved and prior limitations incurred from vehicle speed, light fluctuation, angular skew, character segmentation and recognition have been solved with today's algorithm technology. Additionally, prior cost prohibitive fees have made way for more reasonably priced implementations allowing application to thrive in multiple industries.

License plate recognition involves capturing photographic video or images of license plates, whereby they are processed by a series of algorithms that are able to provide an alpha numeric conversion of the captured license plate images into a text entry.

Lanes refer to the area that accommodates a vehicle. Just like a lane on a street or a freeway, one lane is the exact size for 1 vehicle. The same definition applies for License Plate Recognition. It is within this path that the vehicle encompasses the camera's field of view and plates are captured. Typically, one camera is used per lane. Although, newer HD and megapixel cameras allow for 1 camera to support multiple lanes given their large resolutions. 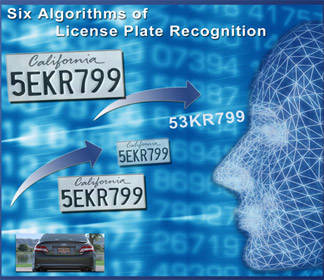 Perhaps the core dependence of any License Plate Recognition system is the effectiveness of its algorithms. The algorithms are quite meticulous and typically require hundreds of thousands lines of software code to compensate for such complexities. Large mathematical models are constructed and computer modeling may be done using super computer systems to account for multiple scenarios. As a whole, a series of six primary algorithms are necessary for a License Plate Recognition system to be successful.

Localizing is an algorithmic function that determines what aspect of the vehicle's image is the license plate.

This variance can further compound the complexity for an algorithm to ascertain what area of a vehicle constitutes a license plate and what area is not. For example, the algorithm must rule out a vehicle's mirror, grill, headlight, bumper, sticker, etc. In general, algorithms look for geometric shapes of rectangular proportion. However, since a vehicle can have many rectangular objects on it, further algorithms are needed to validate that the identified object is indeed a license plate. To accomplish this, key components of the algorithm look for characteristics that would indicate that the object is a license plate. The algorithm searches for a similar background color of unified proportion and contrast as a means to differentiate objects on a vehicle.

Vehicles are moving objects and their rate of velocity must be accounted for in the algorithm's design. This speed creates further complexity as a license plates image is angularly skewed and subjected to refractory issues from light changes. External hardware components and filters may be used to control for light fluctuation.(See External Hardware)

Angular skew and lighting fluctuations are controlled for by newer designed algorithms that are capable of reading license plates at speeds of up to 100 Km/Hr. Normalization components in the algorithms are able to adjust for the contrast and brightness shifts that occur. 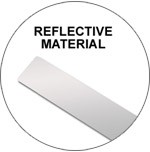 Many countries are now adopting license plates that are also retroreflectors. Essentially, these types of license plates improve the visual qualities of the image by reflecting light back in the same direction of the source with minimal scatter. This retroreflective ability improves reading ability substantially by algorithms.

Components of algorithms that adjust for the angular skew of the license plate image to accurately sample, correct, and proportionally recalculate to an optimal size.

Algorithm for regulating the contrast and brightness of the captured license plate image.

Algorithm that locates the separate alpha numeric characters on a license plate.

Algorithms also look for characters of equal color and equidistance, with similar font structures to break apart each individual character. This sequential congruency of the characters embodies a characteristic set that is typically uniform, regardless of the type of license plate. Character Segmentation separates each letter or number where it is subsequently processed by optical character recognition(OCR) algorithms.

Algorithm for Translating the captured image into an alpha numeric text entry. 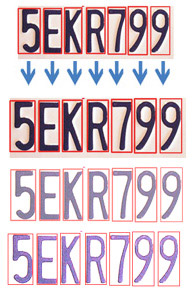 Algorithm to verify alpha numeric information and arrangement with a specific rule set.The algorithms operate sequentially with instructions being executed in milliseconds. The successful completion of each algorithm is required before subsequent algorithms can be operational.

Vehicles are large mass objects with a variety of shapes, designs and colors. Algorithms must be able to determine what part of the vehicle is actually the license plate.

Different countries, states, cities and regions have different standards, dimensions, colors and character sets for license plates. This inconsistency requires algorithms to be inclusive to such extensive criteria. 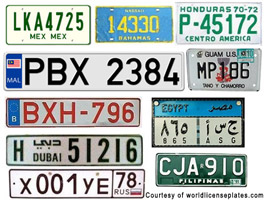